Page 3 Rev. May 27, The following is a list of changes and fixes in this release. Fixed Issue originated in v3. Added Feature — Newly supported devices include: Added Feature — It is now possible to administer more than devices in one Firmware Loader session.

Added Feature — Specifying the devices to which new firmware is to be applied is now more streamlined, and proactively prevents errors by guiding the user through the process. Page 4 Rev. November 11, The following is a list of changes and fixes in this release. Added Feature — The Supported Devices list is now downloadable from Extron servers from within the application. Added Feature — Newly supported devices added to device list include: Removed Feature — The automatic logging of unhandled exceptions into Output. Page 5 Rev.

Some firmware loads require a longer reset period, which was causing the application to report a failed upload, when in fact, the upload is successful. This issue has been corrected. Added Feature — Added the ability to pass in a firmware file path. Page 7 Rev. 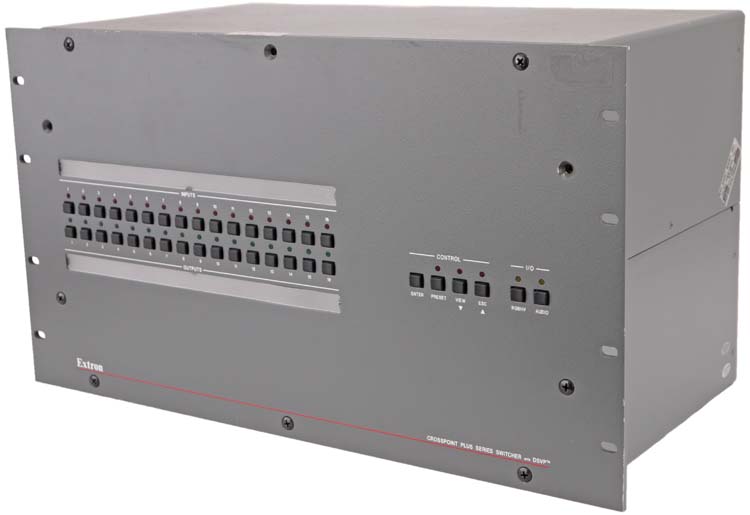 The dialog allows the user to change the pacing for each individual unit or select multiple units. Page 8 Rev.

August 6, The following is a list of changes and fixes in this release. Added Feature — Added support for newer longer part numbers that are expected to be used in the near future.

Added Feature — Application will confirm the correct date Extron CrossPoint MVX 1616 Matrix Switcher IP Link-based products and ask the user if they would like to update their boxes if it is off by more than a day. Page 9 Rev. January 12, The following is a list of changes and fixes in this release. Fixed Issue — Under some circumstances he IN, will respond to the bootloader version query with binary characters.

Firmware Loader can now recognize and decipher the response. The Firmware Loader will take the current firmware version into account when making this query. The application will now check for access rights and will not write the file unless allowed. A shortcut to this has also been added to the start group.